This sweet Cinnamon Popcorn recipe makes a great snack for both the kids and adults. You just need FIVE simple ingredients to put this recipe together and you can be enjoying this sweet popcorn in less than 10 minutes. This recipe can also be doubled or halved and it is budget friendly too.

When it comes to easy snacks, this Cinnamon Popcorn recipe will soon become one of your go to recipes. Homemade popcorn is a healthy and inexpensive snack for the kids (plus grown ups!) and I make a batch each Sunday to last us all for the week. I buy my corn kernels in bulk from a local co-op and find that 1kg will last us about two months. While the boys enjoy eating plain popcorn, for something a little bit different I have been making this Cinnamon Popcorn for them and they have both given it a big thumbs up.

To make this Cinnamon Popcorn, you will need:

How to Make Cinnamon Popcorn 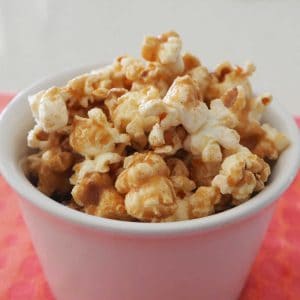 This easy Cinnamon Popcorn recipe is a great alternative to plain popcorn and will be a hit with the entire family. It is perfect for lunch boxes, snacks and as a healthy party food alternative.
No ratings yet
Print Recipe Pin Recipe
Prep Time 3 mins
Cook Time 5 mins
Total Time 8 mins
Course Snacks
Cuisine Australian
Servings 4 people
Calories 144 kcal

You can find more simple snack recipes in our ThermoBliss Snacks Recipe Books, available also in a bundle set. Shop the full range of books and eBooks here.