After the surprising success of my Magic Custard Cake (I was seriously worried it would’t turn out) I decided it was only right to try and make a Chocolate Magic Custard Cake – I mean can you blame me? Who wouldn’t want to try a chocolate version of this delicious, easy and magic cake!

It took a couple of attempts before I found the right ration of cocoa and flour. My first attempt while it looked like a ‘chocolate cake’ it seriously lacked any real chocolate flavour. That didn’t stop my husband from demolishing the entire the cake…..  I also think my first attempt may have been thwarted by an enthusiastic little ‘helper’ who may have added an extra tablespoon (or two) of flour to the mixture. 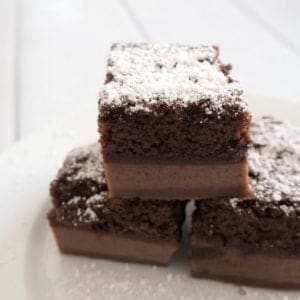 Serving: 0gCalories: 0kcalCarbohydrates: 0gProtein: 0gFat: 0gSaturated Fat: 0gPolyunsaturated Fat: 0gMonounsaturated Fat: 0gTrans Fat: 0gCholesterol: 0mgSodium: 0mgPotassium: 0mgFiber: 0gSugar: 0gVitamin A: 0IUVitamin C: 0mgCalcium: 0mgIron: 0mg
Tried this recipe? Please leave a rating and tag me on Instagram! Mention @createbakemake or tag #createbakemake!
As with the original Magic Custard Cake, your cooking time will vary depending on the temperature of your ingredients.  It’s also important to make sure your mixing bowl and beaters are clean and dry before you start beating your egg whites.

Do your creations turn out so much better when you don’t have a little helper?