For the past few weeks I have been on a mission to cut down the amount we spend at the supermarket.  As a family of four (including two very little people), we were spending WAAAAAY too much on groceries each week, and what is even worse, we were wasting a lot.

I’ve given meal planning a go in the past but life happens and something always seems to pop up and all my planning goes out the window.  This time, we are three weeks in and it’s all going well (touch wood). We are saving money by cutting down our supermarket trips, we are not wasting nearly as much food as we have in the past and our pantry and freezer are getting a good clean out.

I came up with this pasta the other night to use up two eggplants that were sitting in the crisper, as well as some leftover bacon and a few tomatoes that had seen much better days.  I admit I didn’t have huge expectations sitting down to eat this, especially as the boys hadn’t tried eggplant before, but I was pleasantly surprised! 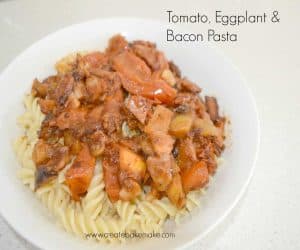 200g dried pasta of your choice.

* In a large frypan over a medium/high, heat olive oil in pan before adding garlic, eggplant and bacon.  Cook for 5 minutes until bacon and eggplant are beginning to brown.

* Meanwhile, add pasta to a pot of boiling water and cook as per packet instructions.  Once cooked, drain and set aside.

* Reduce heat to medium, add the tomatoes, dried herbs and sugar, and stir to combine. Allow sauce to simmer for 5 minutes, before reducing heat to low and cooking for a further 15 minutes until tomatoes have started to break down.

* Divide Pasta among bowls (this amount fed two adults as a side dish, 2 toddlers with leftovers) and top with sauce and your favourite cheese.

What yummy new recipes have you come up with when you don’t have much to work with?