Minimalism and decluttering seems to be the flavour of the month at the moment, however it’s something I’ve been making an effort to do for almost the past two years now. Not long after we discovered that we were expecting our third little man in late 2015, I made a conscious decision to start taking some serious steps to help me feel better organised (and less overwhelmed) and one of the ways I could do that was to start getting rid of clutter around our home, as we had so much ‘stuff’ lying around that we either weren’t using or didn’t really need. Today I’m going to share with you some of the reasons and how and why I have been getting rid of clutter around our home. 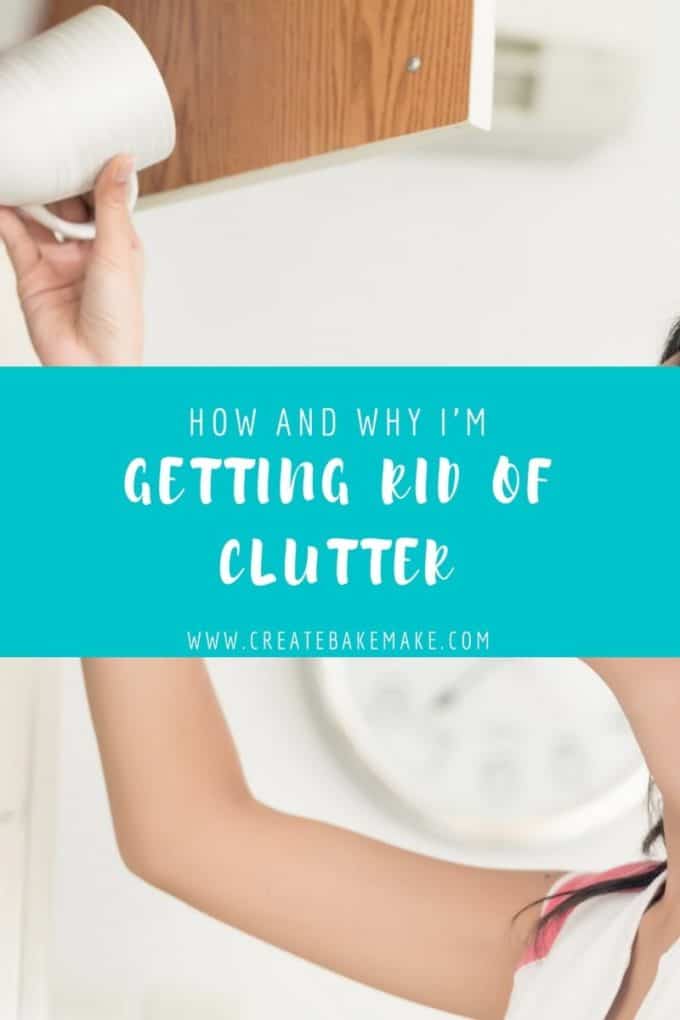 I was feeling unorganised and overwhelmed

While I’m certainly no organising guru, I do try to be fairly organised but find having ‘stuff’ just lying around or spilling out of cupboards and drawers makes it so much harder to feel on top of things.  I find that a clear space (well as much as it can be with kids!) helps give me a clear head – well most of the time anyway!

It helped the kids

Yes seriously!! Not long after our youngest little man was born, I went on a rampage through the house and our backyard one night and either put away or set aside to donate EVERY SINGLE one the toys our kids owned.  Yes my state may have been heavily influenced by lack of sleep and raging new Mum hormones, however the result was pleasantly surprising.  After giving away/selling toys that they hadn’t touched in months/had outgrown or were simply broken, I divided their remaining toys (which there were still plenty of) between 5 tubs and placed them into our linen cupboard. Each morning I now take out one of the tubs (which has a mixture of toys in it) and they happily play with them (as they feel like long lost toys!), use their imagination more and perhaps most importantly it’s reduced the amount of fighting over toys between the two older boys as they now can’t pull out every single thing that they own and then argue over who is going to use it.

When I thought about it rationally, it made no sense to keep the size 8 work suits I hadn’t worn for six years (and will most likely never fit into again) hanging in the cupboard in our spare room, so why not sell them to someone who will use them and make some extra cash along the way?

We don’t really need it

I can be really sentimental when it comes to ‘things’ around the house and unless they hold some super special memories (e.g. items from my pregnancies, the boys first clothes etc or keepsakes I look back on regularly), I’ve decided it’s time to go as let’s face it, if I haven’t used the exercise ball that has been sitting (deflated) in the cupboard for the past two years, I’m really not going to start using it now!

Tackle one area at a time

In the past when I’ve been gone on a ‘decluttering rampage’ I’ve tried to tackle more than one area at a time to terrible results. The process has quickly become too overwhelming thanks to all the ‘stuff’ I pull out and need to make a decision about, and I’ve ended up putting it back into cupboards/drawers without actually having achieved anything.  Now, I am working on just one area at a time. This allows me to not feel overwhelmed and actually finish the job that I started.

Give myself time to make a decision

For some items that I just wasn’t sure if I could part with them, instead of pressuring myself to make a decision, I popped them into a bag/container and then look at them again in a month or two. If we haven’t used them or missed them, I know we don’t really need them and out of the house they go.

Ask myself if we really need it?

I can be really sentimental when it comes to ‘things’ around the house and unless they hold some super special memories (e.g. items from my pregnancies, the boys first clothes etc or keepsakes I look back on regularly), I’ve decided it’s time to go as let’s face it, if I haven’t used the exercise ball that has been sitting (deflated) in the cupboard for the past two years, I’m really not going to start using it now!

Thinking more about the things we’re bringing into the house

Now this can be a really hard one!  I’ve long been a fan of buying items we regularly use in bulk, or buying clothes/toys etc for the kids in advance, but although this is a great way to save money, when some items need to be stored for a couple of years (yep I’ve seriously bought clothes in much bigger sizes!) I am trying to pull myself up and ask if it’s really worth it.  I’m also asking myself this question when the impulse shopper within wants to snap up a new book to add to my reading pile (which is already HUGE) or an item that I see and like for our home as by bringing less into our home, there is then less to declutter and go to waste.

Making it an ongoing project

It’s been well over a year since I first started our decluttering project but I find it really is an ongoing work in process.  As the boys grow older, I’m finding that I need to re-visit the areas that I’ve previously gone through to look at how they are currently working for our family and what changes I can make.

So there you have it, a few of the reasons of both why and how I have been getting rid of the clutter within our home.  I’m certainly no expert, but I hope you’ve found some useful information and tips here!

Have you been working on decluttering your home too? What are some of your tips?