Firstly, a big thank you to everyone who contributed to what turned out to be one of the BEST cupcake recipes I have ever made.  Thank you to The Whoot for sharing a recipe for Ferrero Rocher Brownie Bites, thank you to the lovely ladies on Facebook who suggested alternative toppings and finally thank you to a picture I found on Pintrest  from ‘From Away’ giving me the idea of making my own Nutella Buttercream.

Phew, after all of the suggestions and Pintrest browsing my mind was spinning.  I didn’t want jump into this project straight away, I firstly spent some time thinking about what cupcake recipe I should use – I didn’t want a recipe that was too rich as I didn’t want to take away from the two centrepieces – the Ferrero Rocher chocolate and the Nutella Buttercream. 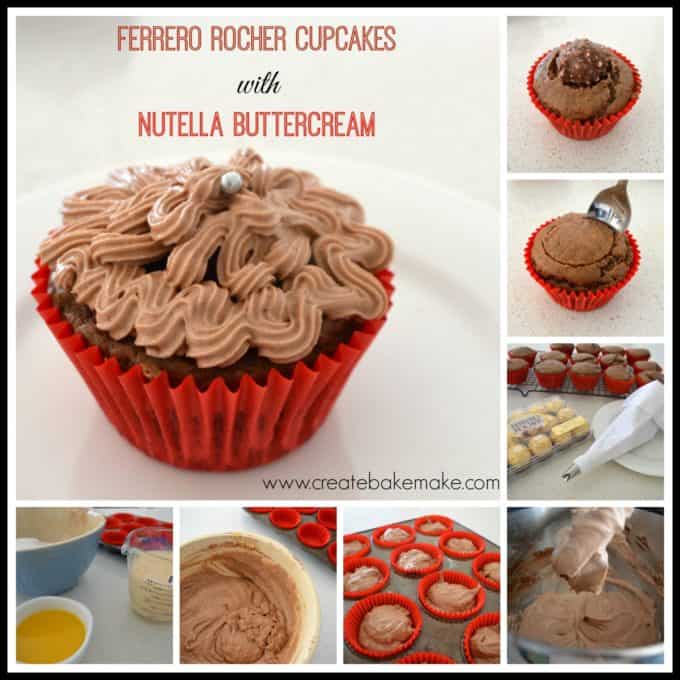 I turned to an old Chocolate Cupcake recipe from one of my Mum’s old recipe books. It’s a basic recipe with a mild chocolate flavour.  I’ve made it a few times and it’s never let me down.

It was then time to get down to business.  First up, the cupcakes. 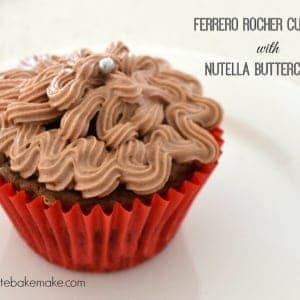 Serving: 0gCalories: 0kcalCarbohydrates: 0gProtein: 0gFat: 0gSaturated Fat: 0gPolyunsaturated Fat: 0gMonounsaturated Fat: 0gTrans Fat: 0gCholesterol: 0mgSodium: 0mgPotassium: 0mgFiber: 0gSugar: 0gVitamin A: 0IUVitamin C: 0mgCalcium: 0mgIron: 0mg
Tried this recipe? Please leave a rating and tag me on Instagram! Mention @createbakemake or tag #createbakemake!
You will also need 12 Ferrero Rocher Chocolates for this recipe.  I may have bought a pack of 15, and I may have sampled a couple while waiting for the cupcakes to bake. Feel free to do the same – no judgement here!

Leave the cupcakes to cool completely. Then using a teaspoon remove the centre of the cupcake – you want to go down about halfway, as you just want to create a nice little nest for your Ferrero Rocher chocolate to sit in. 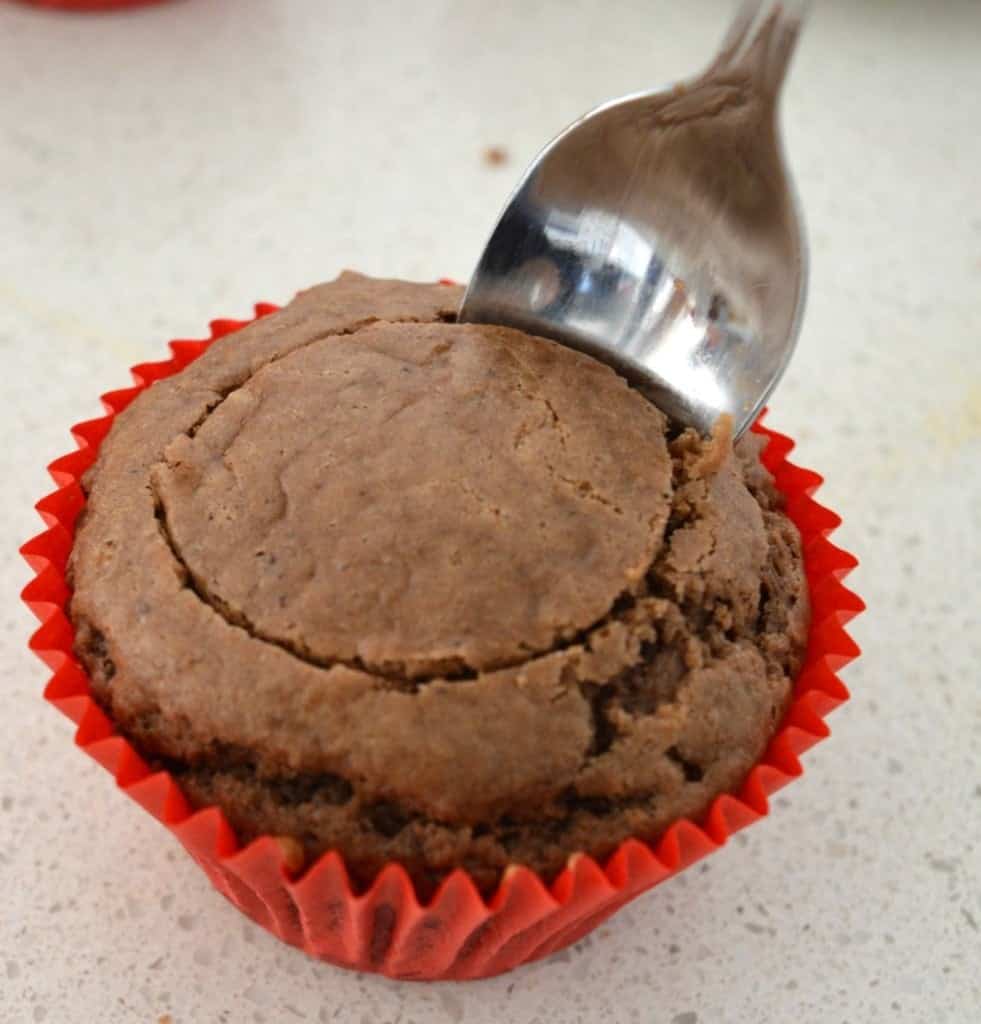 You can keep the little pieces of cake and use them to later to make cake pops if you are really keen (you could even freeze them), or you can earn some brownie points with your husband, warm them up and serve with some custard for dessert.  Your choice! 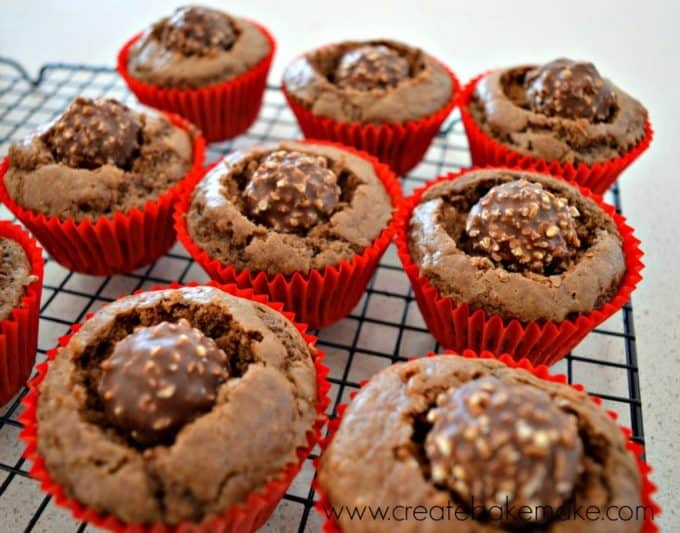 Once the Ferrero Rochers are seated in their little homes, it’s time to make the buttercream.  I used a ¼ cup of Nutella, but if you are a big fan, you can add more – just taste it as you go.

Using an electric mixer, cream the butter and icing sugar together until mixture is pale/almost white.

Add the Nutella and mix together until combined.

Transfer the buttercream into a piping bag fitted with a nozzle of your choice (I used a small star nozzle). 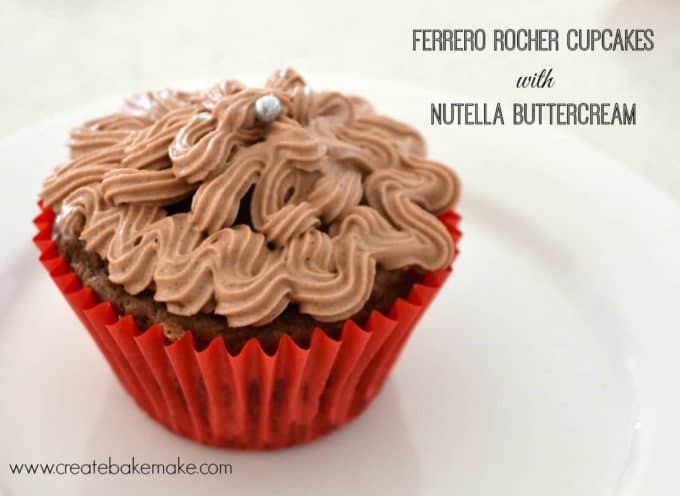 And there you have it Ferrero Rocher Cupcakes with Nutella Buttercream.  I tried to be a little creative with my piping and topped each cupcake with a little silver cachous.  I sent the entire batch to work with my husband the next day, as it was waaaay to dangerous to have these hanging around the house. 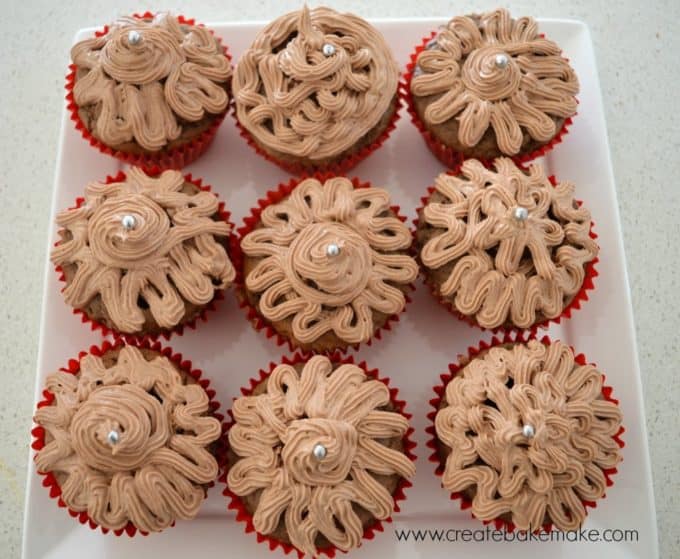 Enjoy!! I’d also love to know what your favourite cupcake and frosting combination is.