When I think of classic Australia Day recipes, Lamingtons are one of the first things that come to mind. I can remember my Great Nan making these when I was young and I can still see her beating the cream and sugar together in a bowl just with her hands.  Her lamingtons were always incredibly soft and yummy, and she would always leave some without jam in the middle for me.

I’ve never made Lamingtons before, so when I set out to find a recipe for them, I couldn’t go past Margaret Fulton’s Baking book.  If I had of read the recipe properly, I would have seen her note which suggested leaving the cake for 24 hours before icing, as this helps prevent it crumbling.  Alas I missed this tip, and went ahead and iced mine as soon as they were cool.  This resulted in the cake crumbling quite a bit, and the lamingtons looked a bit worse for wear…. they still tasted yummy, which I guess is the most important thing!

If you don’t want to go to the trouble of baking  a cake, you could always buy a butter/sponge cake from the supermarket, cut it and ice it yourself. 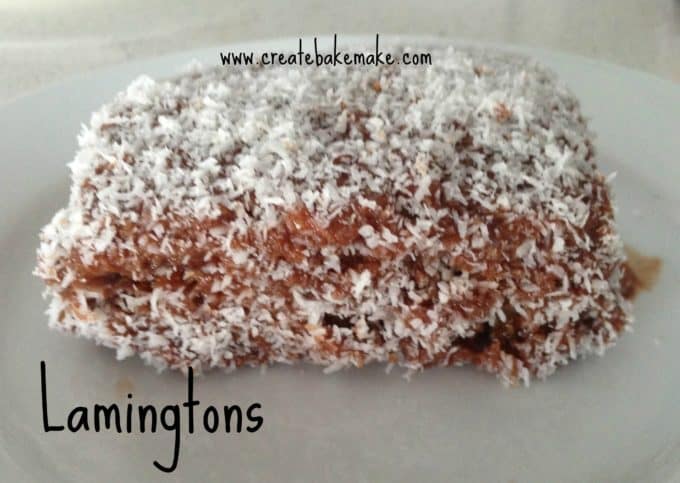 – Preheat oven to 180 degrees and grease and line the bottom of a 20 x 30cm lamington tin.

– Cream the butter until starting to turn white, and gradually add the caster sugar and vanilla until the mixture is pale and fluffy.

– Meanwhile sift the flour and salt three times into a separate bowl and set aside.

– Gradually add the eggs one at a time, beating well after each addition.

– Fold the sifted flour alternatively with the milk into the butter mixture.

– Bake for 20 minutes, or until golden and cooked through

a few drops of vanilla essence

– Sift icing sugar and cocoa into a bowl, add the boiling water, butter and vanilla and combine until mixture is smooth and shiny.

– If using jam, cut each piece of cake in half and smear a little jam in the middle before sandwiching back together.

– Using two forks, dip the cake into the icing mixture to coat. Allow excess icing to drip off before rolling in coconut.  Place onto a wire rack to set.