Those first few weeks (ok months!) with a newborn are tough – learning their cues, establishing feeding, getting into a routine (haha!) and not to mention trying to actually look after yourself at the same time.  If you’ve got older kids too (like a 3 and 4 year old in our case) there are certainly some extra challenges to contend with.  The last time I had a newborn, Mr 4 was just 16 months old and did not understand the concept of no (and still doesn’t) and why Mum was spending so much time sitting on the couch feeding the baby.  To amuse himself, I would regularly catch him scaling kitchen stools so he could stand on the bench, emptying the contents of drawers, the fridge and pantry as well as lots of other ‘awesome’ activities.  This time around I knew busy bags and other things I tried in the past just weren’t going to work, and I’ve been trying different games and activities to keep my older guys amused, so today I thought I’d share wiht you my 6 ways to distract little kids when you are feeding a newborn. 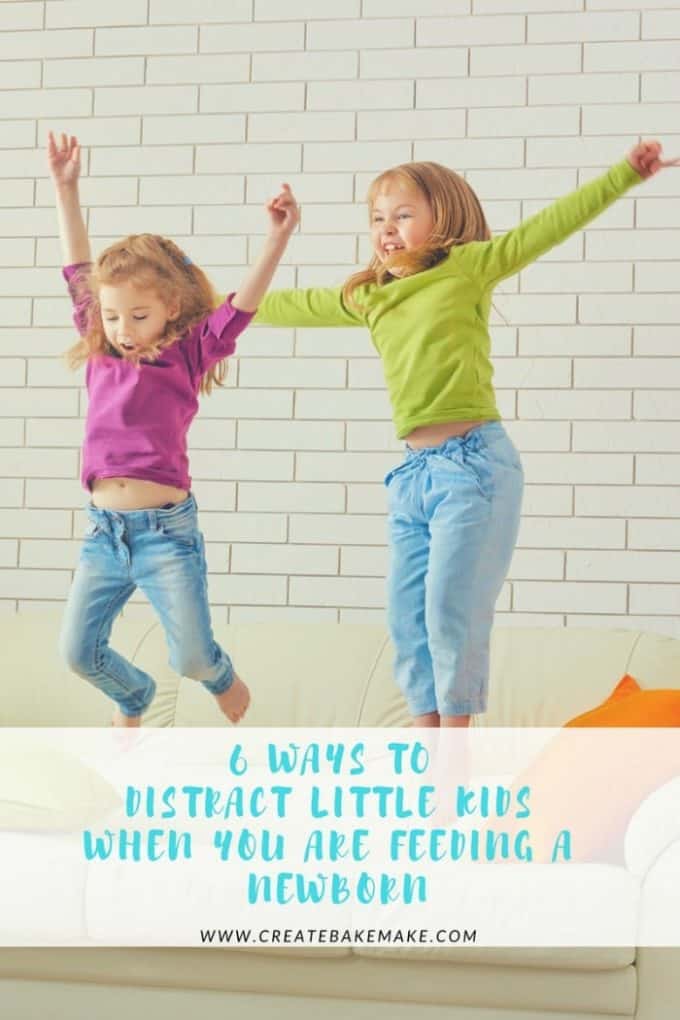 My two boys will jump at any excuse to jump around and have some fun, and I can distract them for a good 10 minutes by asking them to show me what they think different animals (think elephant, snake, dog, frog, crab – the more difficult the better!) would dance like. This then sees them trying to outdo and imitate each other as they bop around the house.

If the competitiveness between the boys now is anything to go by, I’m in trouble when they are older!  Anything one does, the other is adamant they can do it faster/longer/better and I shamelessly play on this by suggesting one can run/crawl/skip/jump (depending on whether we are inside or outside) faster/higher than the other which they are always happy to prove me wrong!  I may have been known to even suggest they run laps of the backyard to see who is the fastest when I’ve need just a few minutes of peace to settle bub – or enjoy a hot coffee!

This is a new addition to my distraction game kit and I discovered this game thanks to a Facebook Live post by Bec from The Plumbette for Munmtastic.  I call out a colour and the boys have to run to something close by and touch something which is that colour. Super simple and really good if you are outdoors. You can find out more about the Colour Game here.

Both of my boys LOVE to eat, so when I’m stuck on the couch feeding our little one, I encourage them to also stop for a snack too.  As much as I’d love to prepare their snacks, sometimes there just isn’t enough time thanks to a demanding baby, so I’ve started creating ‘snack tubs’ for them in the mornings, where I place cheese pieces, cut up fruit, dried fruit and yoghurt into containers at the bottom of the fridge that they can easily help themselves to.  Not only is this a great way to keep them distracted for awhile, but they also feel very grown up getting their own snacks from the fridge. TIP: make sure you move these snack containers to a higher shelf in the lead up to dinner!!

Words that Start With…

This game is a BIG favourite of Mr 4’s at the moment and although it can drive me crazy sometimes (especially when I’m asked to play it non stop in the car!) it’s a both a great distraction and educational which makes me feel that little bit better for letting them watch Octonauts for the previous 2 hours….  In this game the boys choose a letter (which they will often identify first from a book or their alphabet cards) and the three of us take turns coming up with words that start with that letter. When we can’t think of anymore, we then move onto another letter and start again. Simple, but it works!

When both of the boys are around they can amuse themselves with this game for a good 20 minutes or so, however it’s a little more difficult when I’ve just got one of them to entertain. In those instances, they hide somewhere in the area that I’m in and I have to call out where I think they are. It sounds pretty basic I know, but our three year old thinks this is HILARIOUS!!!

I’d love to know what you do to keeps your kids occupied while feeding a new baby – please leave a comment and let me know!!