Three months in to life as a Mum of three beautiful boys and I can safely say that I’m no longer shocked by the outrageous (and often totally rude!) comments I receive about having three boys.  The scary thing is these comments mostly come from complete strangers that we encounter while out and about at the shops, park, doctors, cafes – EVERYWHERE really!

It shouldn’t have come as a total shock to me, as I experienced many of these comments when second son was a baby as well, but people now seem to feel the need to comment even more as 1. We’ve got three boys and 2. We’ve got THREE kids, which  apparently makes us crazy to a lot of people.

I’ve learnt to ignore these comments and have certainly perfected my ‘thanks for your comment/advice’ face but there have also been a few times when people have caught me at a bad time and I’ve just had to completely ignore them and walk away.  What’s scary is that I’ve heard the below comments MULTIPLE times over the past few months and unfortunately I don’t think they will be going away anytime soon. 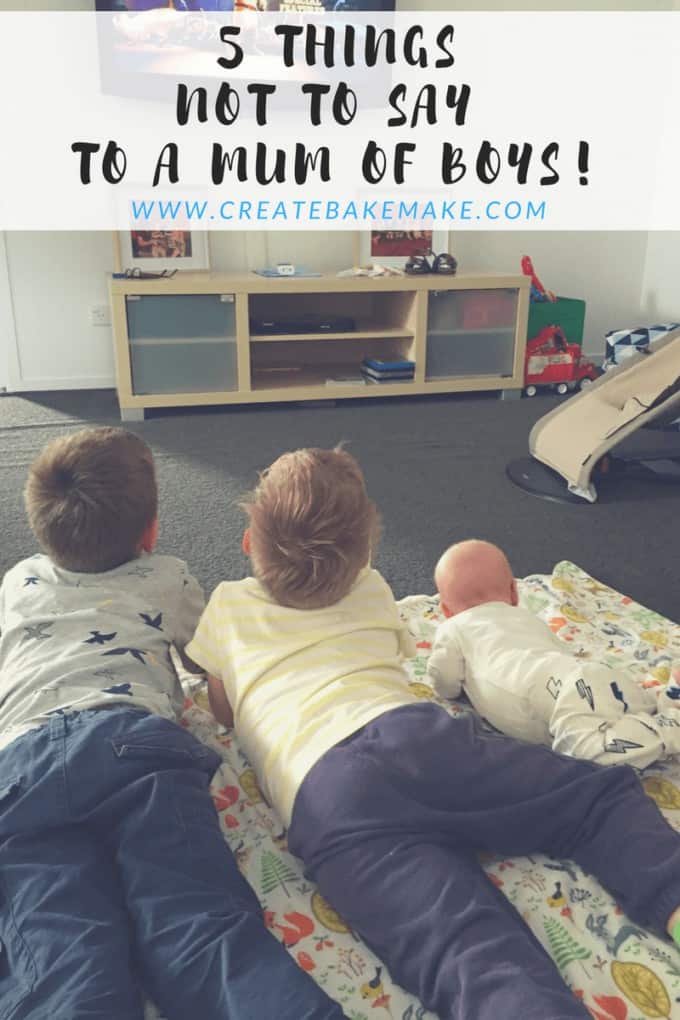 Thanks for pointing out the obvious! This is usually delivered in a somber voice and accompanied by a sympathetic face and head tilt as it’s such a tragedy in the eyes of many….  In reality I feel so incredibly lucky to have three healthy boys who will grow up to be great mates – well fingers crossed anyway!

You’ve sure got your hands full with three boys!

Yes I do, but that’s always going to be the case when you’ve got a 4 year old, 3 year old and 3 month old, and I’m pretty sure my hands would be just as full with three children, regardless of their gender.

I bet you are/were hoping for a girl.

We found out we were having baby boy #3 when I was around 11 weeks pregnant and while we told close friends and family (who were all thrilled for us by the way) we didn’t announce it to the world. This meant I had to endure this comment EVERY SINGLE TIME someone queried me about my pregnancy (and they also would appearstunned at how ‘big’ I was for my gestation – gee thanks!), fun times!  I admit that I did feel some disappointment when we found out we weren’t having a girl, but I wasn’t disappointed or upset that we were having another boy – yep I know that makes NO sense at all!

I couldn’t think of anything worse than having three boys.

Yes, people REALLY have said this to me on more than one occasion, hmm…  I really have to bite my tongue when someone says this to me, especially when I’m with the boys, as there really is something worse than having three boys, having a baby/babies who you have to say goodbye to at the hospital like we did five and half years ago.

You will have to try again to get your girl.

This is often followed up with a comment such as ‘you will lose your boys when they get married’ or ‘there is nothing like a mother/daughter bond’. Yes I’m sure that’s true, but there is also something pretty special about a mother and son relationship which I wouldn’t change for the world.  Also we would never (and haven’t ever) tried to conceive a baby on the off chance we would get a particular gender.

I know these type of comments are not just reserved for those who have all boys (I’ve got friends with all girls who have experienced similar.  Have you heard any of these comments before?  What are some of the strange things people have said to you about your family before?